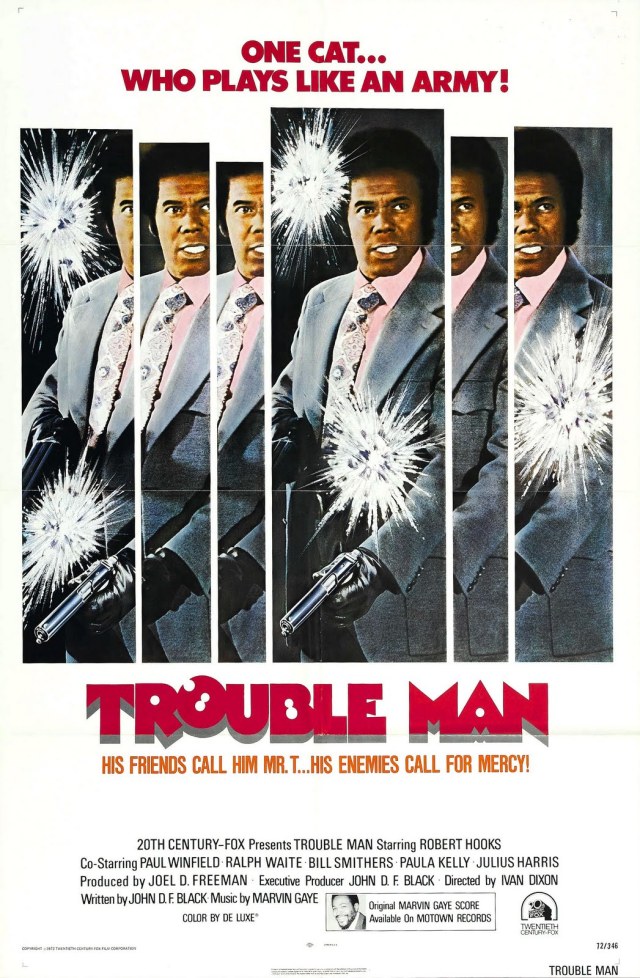 (This is one of the first films I purchased at Kim’s Video. It’s a masterpiece. And the rare film where the trailer is as good, if not better, than the film itself. Honestly, it’s my favorite trailer of all time, right above The Social Network. In fact I was disappointed to see Trouble Man’s soundtrack referenced in the Captain America: The Winter Soldier. The last thing I want to do is share my enjoyment of Trouble Man with people who think the Winter Soldier, basically just Scott Stapp in a facemask, makes for an interesting bad guy.)

“Reverence for the past is a universal human trait — or, at least, a recurring symptom of modernity — and the laws of capitalism, technological change and collective taste ensure that things are never what they used to be. The afterglow of your unique, youthful experiences — the kisses and cigarettes and cups of espresso that followed the movie, as much as the film itself — cast a harsh, flat light on the present, when you sit at home watching a DVD with a cup of herbal tea as your spouse dozes next to you on the couch.” – A.O. Scott

One miserable night last November I  went downtown to meet a blind date at a wine bar in the East Village. It was one of those gloomy New York nights where the rain and wind kept switching sides. The kind of night where four foot ponds of black sludge encircle every street corner. The kind of night where some jackass rushing down the subway stair knocks you in the knees with his four-thousand dollar briefcase and then has the gall to shoot eyes at you.

Anyway, the date was forgettable. She worked for a comedy website and kept pretending to not understand my questions (or maybe she really didn’t know what I meant by “Does making jokes for a living push your sense of humor into weirder places?”, which would be worse). The evening’s only saving grace, aside from a slight buzz, was that after we parted ways I was close enough to Kim’s Video that I could pop in and browse the racks for a bit. Because let’s face it, the best way to get over a lousy date is to flip through Russ Meyer DVDs while Hemingway and Gellhorn plays on a flatscreen nearby.

I’ll never be a true New Yorker. I wasn’t born in the city. I don’t like pastrami on rye. I have no allegiance to the Mets or Yankees.  I’ve never been mugged in Central Park. I’m still awe struck by the Statue of Liberty. I’ve never held up mid-town traffic because I needed to use my jackhammer. I’ve never flipped the bird to a cabbie while wearing sunglasses. Yet despite my lack of credibility on the subject of true New York, I do feel the need, the desire, to eulogize one of the great New York institutions, Kim’s Video. I’m saddened to report to the legions (can a legion be less than twenty?) of Grain&Noise readers that one of, if not the best, video stores in Manhattan is closing in July.

Believe me, I’m fully aware that I’m one of last passengers to board the Kim’s train. It gained its reputation as a video rental store. I wasn’t around to see that. At one time Kim’s had locations on the Upper West Side and on St. Mark’s Place. I wasn’t around to see those either. I’ve read articles about the history of the shop and heard the myths of their epic selection (Here’s an article about trying to track down that collection a few years later. It’s essential reading.) but it was before my time. I’ve only known of Kim’s at its last location, 7th street in the East Village.

Alas, even if the current Kim’s Video and Music store is a shadow of its former glory, it’s a shadow that I’ve come to love. As a customer I could always count on three things from any Kim’s experience. One: An older gentleman in a green fatigues browsing through the pornography. Two: A clerk at the counter who’d mastered the slack-jawed indifference that every “cool” place in New York tries to cultivate. Three: An import DVD of some obscure film that I’d come across at the end of an hour long IMDb click maze. It was this last certainty that kept me coming back.

Part of the reason I love New York is the film culture. Albeit it’s a waning film culture, but it’s culture still. When Joe was released in four theaters last month, two were in New York and two were in LA. If I want to see a midnight screening of Obayashi’s House, I can do it. If I want to sit next to A.O. Scott at a screening of The We and the I, I can do it. New York allows a person of cinematic inclination to indulge. New York is to film what Thailand is to French politicians who love young boys.

Kim’s was a part of that culture. Kim’s was the kind of store that I assumed a city like New York would always be able to support. I understand if a video store with a full shelf devoted to Ozploitation wouldn’t survive in Arizona. What the hell does survive in Arizona except cacti and intolerance?! But this is NEW YORK. 8.3 million of the coolest motherfuckers alive and they can’t keep it going? C’mon people.

I understand that the days of owning tangible objects are on the decline. And believe me, I’m not on the Jack White end of the spectrum where every piece of digital technology is viewed as artistic Kryptonite. But I do think there’s a place for stores that sell DVDs and Blu-Ray. Is that crazy to say? I mean what am I gonna do with all my empty wall space if I can’t fill up shelves of DVDs? Buy books? I tossed out all my “Got Cookies” posters when I left college. And I’m certainly not gonna go out and invest in bunch of “Art”. Without DVDs how else will visitors know I have eclectic taste in film? Does this mean they’ll now judge me on my personality rather than my collection of Spaghetti Westerns? I dread the thought.

Truth be told, I too am sick of all the “end of an era pieces”. Print Media. Record Stores. Landline Phones. Gym Class. They’ve all been the subject of our collective hand-wringing at one time or another. But the disappearance of Kim’s Video, and video stores in general, is different. Why? Because this time it actually affects me. Because this time it’s something I actually care passionately about. And it’s cathartic to get cranky.

But if we’re gonna get declinist and we’re gonna complain, lets broaden it out. The closing of Kim’s Video isn’t just bad for New York, and it isn’t just bad for film culture. It represents a much more depressing trend across all facets of shopping. The decline of browsing (Full disclosure: I say this as someone who works in one of the last stores where people just wander in off the street and browse, a wine store). Some of my fondest, most instructive, most PLEASANT experiences have been killing time by browsing. You know, standing in one spot, flipping through things. Yes, you can browse online. And I hate to be that guy, but online browsing doesn’t have the same spontaneity of browsing in a store. There’s less discovery. You’re not forced to comb through anything you don’t want to see. Not to mention the human interaction of browsing, even if it is only to mutter as some husky neckbeard tries to squeeze past you in an aisle built back when the default human weight wasn’t 200 lbs.

And Kim’s was beautiful in the kind of shit you’d see while browsing. Not only the movies, Lee Remick in A Severed Head, who even knew that was thing?! But the people watching was also choice. Kim’s is the kind of place where one night I would come across a cross-dresser chewing out the clerk for not stocking 13 going on 30 and the next week find Ryan Adams examining the box set of Dark Shadows.

So it’s with a heavy heart that bid farewell to Kim’s video. It’s going the way of dinosaurs and penmanship, extinct. Sigh. I may never be a true New Yorker, but I suppose now when people ask how long I’ve lived in the city, I can say that I’ve been here long enough to see a great store shut its doors.

-Just a small sampling of films that I’ve purchased at Kim’s, which I’m positive could not have been found anywhere else, are as follows (You’ll notice a lot of these have been the subject of posts on this blog): Class of 1984 (dir. Mark Lester), Westworld (dir. Michael Crichton), A Boy and His Dog (dir. L.Q. Jones), Three Days of the Condor (dir. Sydney Pollack), Trouble Man (dir. Ivan Dixon), Cutter’s Way (dir. Ivan Passer), Parallax View (dir. Alan J. Pakula).

← Under the Skin
Queen Margot At The Wedding →