Queen Margot At The Wedding 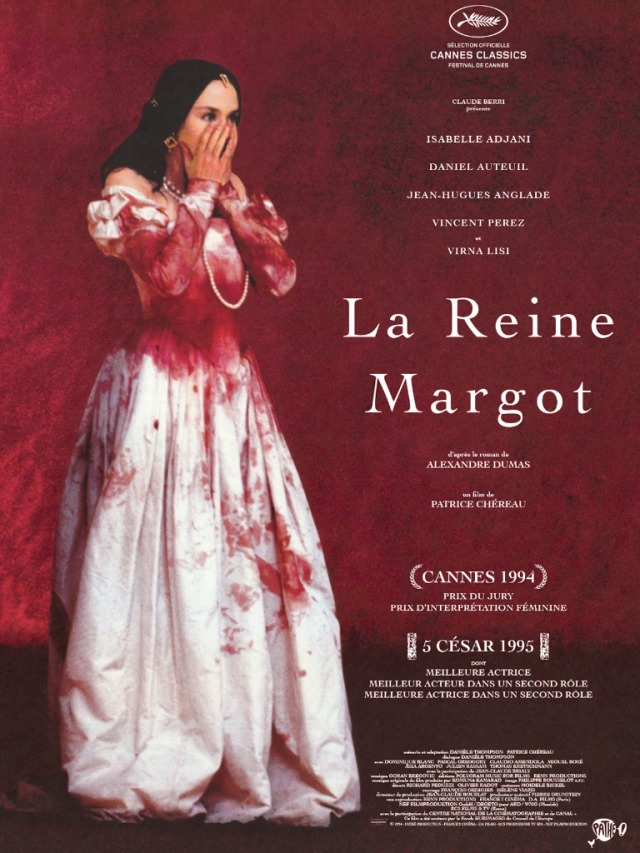 (Incredible poster right?! Now check out the U.S. version of the Queen Margot poster. Not even close.)

“Frontiersman were never afraid of poetry. It was Big Business with its fear of femininity, it was the eunuchoid clergy capitulating to vulgar masculinity that made religion and art sissy things.” – Saul Bellow

Like many great films, The Godfather, The Deer Hunter… Old School, Queen Margot begins with a wedding. The year is 1572. Margot (Isabelle Adjani), the Catholic sister of King Charles IX has been forced into an arranged marriage with Henri de Bourbon, the Protestant king of Navarre. The marriage is a chess move, designed to bring unity to France. King Charles and his scheming mother, Catherine, want the Catholics and Protestants to make peace so the country can get back to the real business of warring with the Spanish, rather than with themselves. And it’s this wedding which immediately sets the tone of the film to follow. Ornate priests in golden robes. Thousands of guests sitting artfully posed. A lot of beautiful pomp and circumstance. But at the center of this spectacle are the same spoiled, vindictive, violent tendencies of any human being, royalty or not. The priest goes through his ceremonial questions, but when he asks if Margot is she takes Henri to be her husband, she hesitates. Silence reverberates. The priest asks again. Margot says nothing. So King Charles, at the behest of his mother, walks up behind the queen, yanks her by the hair, and forces her head down in submission. She whimpers. The priest takes this as a “yes” and continues on.

From there the film recounts Margot’s tragic story, including  The St. Bartholomew’s Day Massacre (Which isn’t, as I mistakenly assumed, just a funny name to refer to that time your friend Chad barfed a whole bunch one weekend in St. Barts), as well as a secret affair she conducts with a Protestant soldier known as La Mole. In a lot of ways Queen Margot is the perfect precursor to Game of Thrones. The film is every bit as hedonistic and cutthroat. There are mass orgy scenes. Wild Boar hunts. Poisonings. Massacres. Greasy dudes on dirty horses. Except unlike Game of Thrones, these characters aren’t the fantasy of a football-loving, Guillermo Del Toro look-a-like, but actual historical figures. Queen Margot is a French film based on a historical novel of the same name by Alexander Dumas (Dumas of Three Musketeers fame…and to a lesser extent  The Three Blind MOUSEketeers fame). And while some of its content has been exaggerated for modern audiences, even if half the bits shown in Queen Margot are true, we can be sure that France in the late 1500’s was like Eyes Wide Shut with more death and ruffles.

Queen Margot was directed by Patrice Chereau. Chereau, from what I could find, is a revered theater and opera director who helmed many critically acclaimed films including the 2001 film Intimacy. Intimacy should be familiar to any teenage boy who was searching through libraries in the early 2000s for foreign VHS tapes that promised scenes of “unsimulated” sex. Not saying I was one of these teens… but I’m not saying I wasn’t one either. Chereau’s background in theater makes perfect sense considering the performances in Queen Margot can border on….overwrought.

When King Charles is having a mental crises over a decision to potentially assassinate Admiral Gaspard, one of his closest friends,  he collapses onto the floor, in front of his family and starts convulsing with emotion. He screams and moans. He rolls around on the ground like a short haired dog covered in bees. He weeps with such ferocity that you think this guy might die from dehydration. And it’s captivating! The high drama, the backstabbing, the violence, the sex, its all so precisely and expertly depicted that you’re riveted.

Added mention must be made of Virnia Lisi who plays Catherine, the Queen Mother. She looks like a cross between Nosferatu and those aliens from Star Trek: First Contact. The way she alternates between sweetness and ruthless pragmatism is a thing of beauty. One moment she’s cradling her son’s head in her arms like a baby and the next she’s literally watching from the shadows as people are speared to death on her orders.

In case it’s been unclear, I can not recommend this film more highly. It’s so rich, so layered, so immaculately conceived that it’ll appeal to the hardcore cinephile or the casual film goer. The colors, the textures, the costumes, the photography. It is truly a gorgeous film. Not only that, but you can trust the integrity of the images on screen. Meaning that the film has captured real objects and real people on real sets. Queen Margot was made in that sweet spot, 1994, right before digital manipulation began to take over. Therefore, some costume designer had to go out and make costumes for the hundreds of extras. Some animal trainer had to corral hundreds of horses for the soldiers to ride. Some prop person had to make sure the blood was the right shade of red. They couldn’t just change everything in After Effects. And you can feel it on screen! When I caught one of the extras breathing, as he was  lying in a pile of dead bodies, it didn’t make me cry foul. I was even more impressed. Holy shit, those are actually hundreds of real people stacked up like bloody lumber.

Queen Margot also made clear that as “progressive” as we believe our current attitudes toward sex to be, we can’t hold a candle to the free-flowing sex fest of Medieval royalty. Yeah, we may wear shorter shorts and tighter shirts, but 1572 was a time when people were straight up fellating one another in the hallways of the Catholic Church.  There’s a scintillating (figured I’d give that word shot) scene early in the film, after the wedding, when Margot and her friends are assessing the fuckability of Henri and his protestant friends. The scene is brilliant,  on the one hand because of how modern the sexual dynamics seem to be, and on the other hand because their desires aren’t hidden behind the anonymity of text or Tinder. These are people making eyes across a courtyard, whispering about who’ll be sleeping with who that night.

I did wonder at various points what folks in the 1500s used for protection? Was that a thing they considered?  Almost upon meeting one another, Margot and La Mole have stand up sex in an abandoned hallway. I’m wondering if they were even concerned about an unwanted pregnancy? Maybe because they might poisoned at any minute it wasn’t a huge concern? Or was there a Medieval equivalent to the condom?

The ending of Queen Margot is so extreme  that you’ll wonder how the filmmakers got away with it in 1994. If you want a hint as to what happens let’s just say that La Mole will no longer be looking aHEAD to the future.  La Mole won’t be getting a HEAD start anytime soon. La Mole won’t be making any spectacular HEADers in the World Cup. You get it? They cut off his head. As the film ends we see Margot riding away in a carriage with his severed head on the seat next to her.

Finally, and especially after lamenting the loss of Kim’s Video in my last post, I want to point out how incredible it is that films like Queen Margot are still being remastered and re-released. Even as the places where you can see and buy these movies continue to dwindle, there are still some stubborn companies out there willing to put resources toward remastering a 20 year old French costume drama. I can’t imagine ever stumbling across this film if not for the 20th anniversary re-release. It’s the kind of thing that, once again, makes me realize how little I know about cinema history, especially international cinema. There’s so much to see! Not only that, a lot of it is really, really, great. So let’s all take a moment and pray to the Gods of film that we never reach a point where “Netflix recommends” becomes the only arbiter of our viewing decisions. Otherwise, instead of beautiful kings and queens plotting to murder their enemies, we’ll all be stuck watching Beverly Hills Chiuana 2, where literally in the first five minutes a Chihuahua says “Ai Chiwawa” into the camera. Trust me, I’ve seen that too.

– So a little research reveals that the earliest condom dates back to 1640. However, they were known to be in use before then (I researched this at work so lets hope my boss doesn’t check search histories). They were typically made from linen,  sheepskin, or intestine. Which I suppose is a testament to the strength of our desires. Strong enough that we were willing to wrap a piece of  an animal’s innards, formally filled with excrement, around our intimates before we nestled in to make love. I’m just hoping this trend toward outdated  modes of living (collecting rain water) and eating (Paleo diet) doesn’t extend to our sexual lives. The last thing I want to do is put an intestine on my person because it’s somehow better for my skin, or the environment, or whatever.

– Isabelle Adjani may be the most beautiful person in the entire world. That is all.