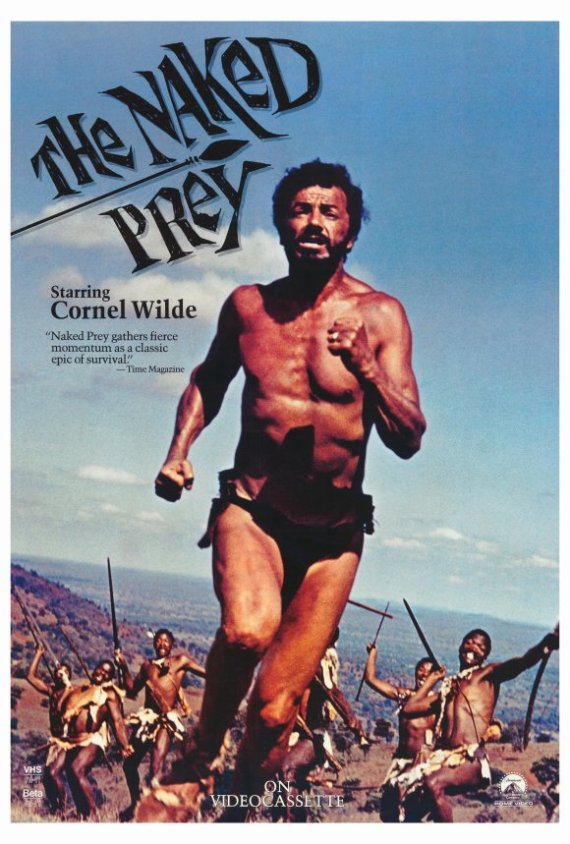 So here’s my first semi-review gang. Enjoy. Or at least be slightly amused.

“Ain’t no need of even askin brah, the best women all reside in Africa, and that’s real.” – Ludacris, Pimpin’ All Over the World.

(This quote doesn’t really have anything to do with The Naked Prey except that they both involve Africa.)

There was a scoutmaster in our Boy Scout troop who was beloved by all the scouts. His name was Mr. Anderson and he took himself the least seriously of all the other leaders. In appearance he resembled a slightly less husky Drew Carey and he was always quick with a joke or some piece of insight into life. My favorite token of wisdom: “The two biggest disappointments of a man’s life are his children and his first sexual experience.”

Anyway, Mr. Anderson had two films that he referenced on a regular basis. They were John Milius’s Conan the Barbarian and Cornel Wilde’s The Naked Prey. Now, I’ve seen Conan the Barbarian countless times. In high school the dialog between the Mongrel General and Conan was an oft-repeated staple of our Halo matches. However, I never got around to seeing The Naked Prey. It was one of those films that never seemed to be in the library when I remembered to look. Furthermore, I already knew the basic plot by heart considering that on every camping trip whenever we built a fire, cooked food, or any basically did anything involving survival skills, The Naked Prey was sure to be brought up.

Cut to years later, out of nowhere, The Naked Prey is re-released on Criterion collection. And then, like a month later, it’s referenced on an episode of Mad Men. Thus I figured now was as good a time as any to finally see what Mr. Anderson had been talking about all those years back.

The Naked Prey opens with a group of British poachers moving across the savannah searching for ivory and big game. They soon come across a native tribe and through an act of hubris become the tribes’ prey. I’m not giving anything away to say that everyone is killed in the first twenty minutes except for one man (Cornel Wilde), in fact, the credits list his character as The Man. The savages then release The Man so they can hunt him for sport. The rest of the film follows The Man’s struggle to survive. And by survive I of course mean that he eats snakes, spears his pursuers, and staggers around under the hot sun in a loincloth.

Now sure, the portrayal of the warriors is one-dimensional. And yes, the chubby native sidekick that appears near the end is like a cigarette ad caricature from the 1940’s. But the film is genuinely thrilling. And the pacing of the chase sequences are masterfully done. The Naked Prey also succeeds because of scale. While there are a few larger set pieces, including a particularly brutal village burning, most of the movie is done with patient, close shots. The relationship between audience and character is never violated by helicopter shots or wide sweeping vistas. A severe closeness to The Man is built through sustained intimate camera work.

There are also plenty of memorable grisly images. One that sticks out in particular is a shot of the savages gutting a giant elephant. They climb into the open belly of the beast and carry out its organs in massive, sticky red piles. In another stroke of brilliance Cornel Wilde, who starred and directed by the way, inter-cuts the human/savage hunt with other scenes of predator/prey relationships, lions killing gazelle, snakes killing birds, even frogs eating smaller frogs. And the entire film is lit with the golden warmth of those old Time-Life slide shows; you know, the old Kodak slide projectors filled with nature photos, the ones they used in 6th grade science class.

The tribal drum score and the isolated shots of one man in a barren dessert also seem to be precursors to the opening sequence of Planet of the Apes. In fact, those two movies would make a great double feature. They both deal with one man silently surviving in a menacing primal culture. And although their narratives are set about 2,000 years apart they’re almost the same movie. I’m sure if someone wanted to do the research they could find that in a time (the late 1960’s) when the “establishment” was under assault from youth, films where older white men are pursued by savages probably had some larger subtext.

Anyway, The Naked Prey is definitely worth a spot on your Netflix que. It’s visceral and immediate. The kind of movie that reminds you no matter how bad your day is at least you’re not running a marathon in thousand-degree heat being pursued by bloodthirsty warriors…in a loincloth.

The Man maintains a flawless beard throughout the film as if he just arrived off the set of a Just for Men commercial.

At one point the savages cover another man in clay and bake him over an open fire. Would that work? Maybe someone with a science…or cannibal background can weigh in.

Later,  The Man kills a snake, peels it and then eats it raw. Can you eat a poisonous snake? Wouldn’t the poison still be in the snake?  That reminds me of the story about a pastor in West Virginia who recently died during a snake handling. If you haven’t read this article, check it out, it’s wild.

← In the Beginning…
Red Hot Dollars →