A Chance to Reflect 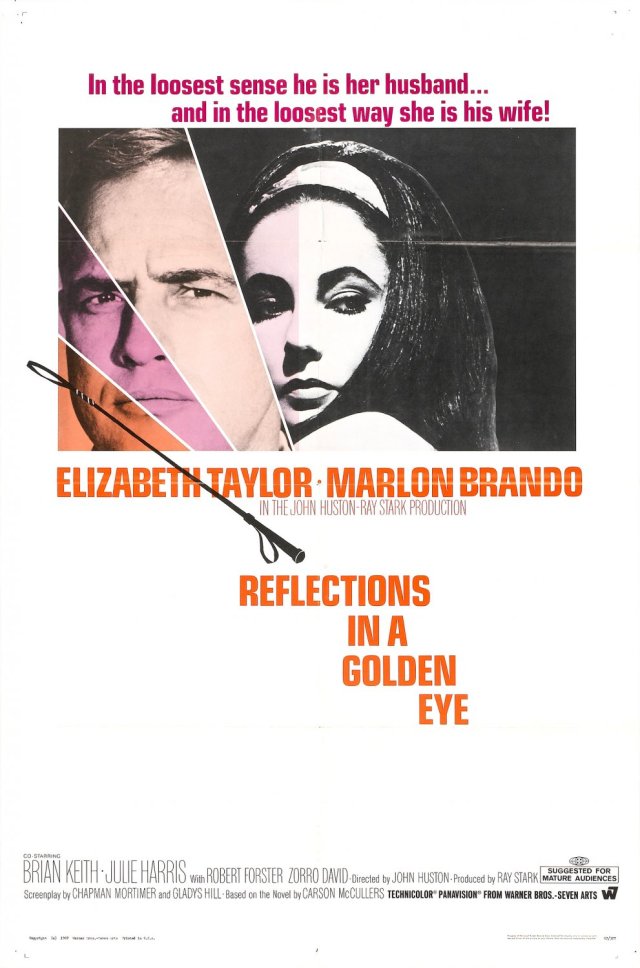 “You love me for me, could you be more phony?” – Kanye West

When someone mentions the year 1967 it immediately calls to mind a very specific set of images. 1967 was, after all, the “Summer of Love” so naturally I think of hippies, Jimi Hendrix, long hair, bright flowers, California, gurus, etc. Thus it’s odd to find a film from 1967 that’s just as revolutionary and  decidedly “different” as the year from which it came, yet, it contains none of the cliched elements we associate with that period. Instead, Reflections in a Golden Eye is the story of a repressed homosexual Army Major named Weldon Penderton (Marlon Brando) living with his wife, Leonora (Elizabeth Taylor) on a southern Army base. The slivers of plot that do exist center around the breakdown of the Penderton’s marriage while occasionally veering off onto some odd, even disturbing subplot. One involves a Lt. Col. named Langdon with whom Leonora is having an affair. Another deals with a Private named Benjamin who develops an unhealthy obsession with Leonora. And yet another explores the psyche of Langdon’s wife who, after the death of her child, attempted to cut off her nipples with a pair of scissors (the brand of scissors is never mentioned but I doubt they were those crappy Fiskar scissors I had as a kid).

Needless to say, Reflections in a Golden Eye is a film shagged in pretension and metaphor. You could probably gather that from the summary alone but just in case you needed more convincing I’ll cite a scene in which immediately after Major Pendelton has a small sexual awakening (more on that in a minute) he mounts a WHITE horse. This white horse then proceeds to go wild and tear through the forest with him on it. Hmmm, could it be a metaphor? You decide.

And the impetuous for Major Pendelton’s minor sexual awakening is even more bizarre. Pendelton and a few other officers are out riding on a nearby trail when they come across a clearing. In that clearing is Private Benjamin nonchalantly riding his horse. Except, wait, something’s amiss. What’s that? Good God! Private Benjamin is riding his horse buck naked! This display awakens something primal in Pendelton. And I suppose you’re meant to sympathize with Brando’s character, forced to pass as a straight man, trapped in loveless marriage, trapped in a military system that values servitude over ambition… but honestly, I felt equally bad for Private Benjamin’s horse. I mean, not only is this horse being ridden around and pressed with sharp spurs, now you got this naked dude’s sweaty taint on your back.

In fact, the whole naked man on a horse scene made me remember how much I fear reincarnation. What if I come back as a horse and some guy decides to ride me around naked? Or worse, what if I come back as a horse and retain the memory of my previous life? What if I’m sentenced (presumably because I once pretended to be asleep on a subway train so that I didn’t have to give up my seat to an old man) to live as a horse but am fully aware that I could be something different? It would be pure torture. And no one would ever know that I had lived a previous life as a human unless I resorted to some kind of Charlotte’s Web-style communication. Maybe spreading oats around with my mouth to form words? But even then, I’d only be a novelty act, and they’d probably take apart my brain in the name of science. Essentially what I’m saying is that when I die I don’t want to come back. Let someone else tag in. My soul is cool just hanging out in the ether.

Anyway, back to the film.

I  picked Reflections of a Golden Eye to review this month because it was directed by John Huston. He’s a filmmaker I’ve recently re-discovered and I think he’s unfairly left out of the conversation of all time greats. When your first feature is perhaps the single best Film Noir of all time, The Maltese Falcon, you know you’re in for a dramatic career and John Huston didn’t disappoint. He directed classics (The Treasure of the Sierra Madre, The Asphalt Jungle), fathered a ton of kids (including Angelica and Danny Huston), was married five times, received the legion of merit for his service in WWII, and acted in a number of films (most notably Chinatown). That’s a full fucking life! It really makes my already minimal accomplishments look like a court sketch up against the Sistine Chapel. Jesus, I’m twenty five and I haven’t even been married once.

Reflections of a Golden Eye comes from Huston’s poorly regarded middle period. He had a less than stellar run in the 60’s. And while Reflections in a Golden Eye is by no means bad, the imagery (see above) and themes can be a bit heavy handed. But there’s still so much to appreciate that I found it worth the watch. For instance, the film was shot with THIS washed out yellow palate, that while initially distracting, eventually starts to work wonders through the way it contrasts even the most trivial bits of flamboyance (a red sweater, a white horse). The color scheme is also very close to that of O’ Brother Where Art Thou? and while I couldn’t confirm it, I’m sure the Coen brothers watched Reflections in a Golden Eye  before directing that film. It reinforces the claustrophobia of the Army base, making everything, even something as benign as a tree, seem stuffy and oppressive.

The film probably could’ve benefited from a little more black humor… or any humor. Any humor would’ve been nice. Maybe it’s too much to ask for from a film that was already pushing so many buttons, but there’s not much to “enjoy” in Reflections in a Golden Eye. And perhaps enjoyment isn’t the point. Roger Ebert argues as much in his brilliant review of The Weather Man. Sometimes movies should be deliberately boring, or unapologetically sad, because those emotions are as necessary to “art” as redemption or hope (two things Hollywood has in excess). But while I loved The Weather Man, I think that’s because it at times made it okay to laugh at how bleak it all was. Reflections in a Golden Eye is too self-serious. Too focused on making. you. feel. bad.

As far as the performances go, it’s hard to argue that Brando isn’t a phenomenal actor. But the downside of being so revered is that I expect every performance of his to teach me something new or be some revelation. Instead Reflections in a Golden Eye contains a serviceable performance with Brando expressing most of his pent up hostility by gripping things very tightly, handrails, books, stirrups. Elizabeth Taylor meanwhile puts everyone to shame. She perfectly embodies the kind of privileged malevolence her character requires. Every word is delivered with such a conniving precision. There’s a scene when Taylor, after discovering Brando has beaten her horse, comes home and begins to whip Brando in the face with a riding crop. It’s a scene that easily could have descend into camp, and hell maybe it does, but I totally bought it as the reaction this particular spoiled Army brat would have. And it’s because Taylor so completely is this woman. It’s too bad a whole generation of people will only know Elizabeth Taylor as the kooky lady in photos with Michael Jackson and the Flintstone’s movie. She was excellent.

– Marlon Brando does his whole mush mouth thing throughout the film. Some lines are barley intelligible because they’re so grumbled. This delivery style would achieve an apex in The Godfather when Brando decided to stuff cotton balls in his mouth for his portrayal of Don Corleone.

-I didn’t get into it here but you could write an entire essay on the Thai caretaker of Langdon’s wife. He doesn’t play a huge role but he continues in a long line of Asian sidekicks, Short Round from Indiana Jones and the Temple of Doom, Long Duk Dong from Sixteen Candles, Dith Pran in The Killing Fields…