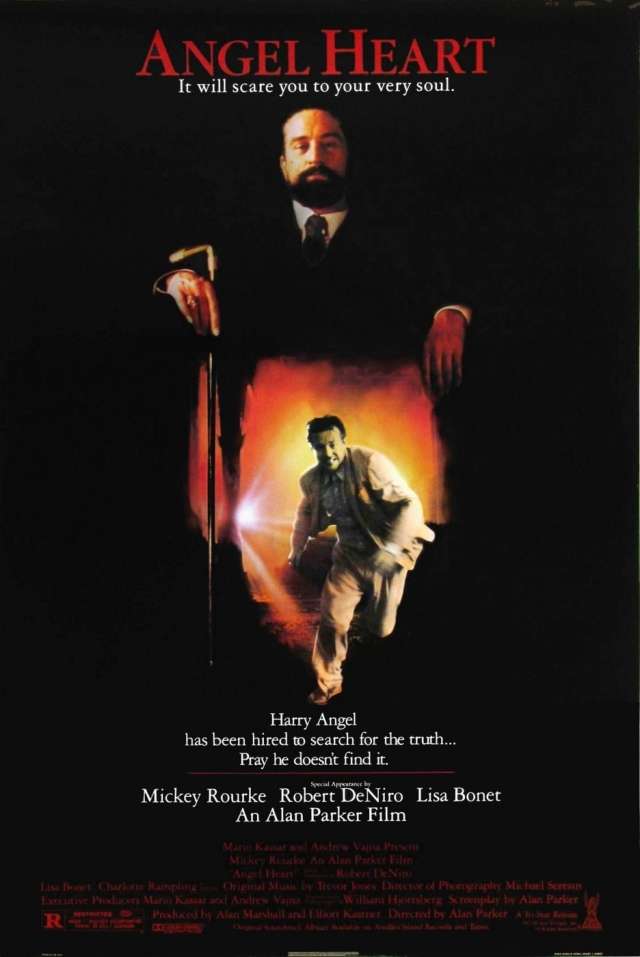 You ever watch one of those films that when it’s over your only question is “How the hell did this get made?”.  Angel Heart is that film. It’s so visually overwhelming and blends so many different genres that you need more than one viewing just to take it all in. Needless to say, I loved every minute of it.

The film tells the story of Harry Angel ( Mickey Rourke), a 50’s  private detective living in NYC who’s hired By Louis Cyphre (Robert DeNiro) to track down a mysterious WWII veteran/musician named Johnny Favorite. Favorite went missing from a New Orleans hospital before he could pay a vague debt he owed to Cyphre. The film is plotted like a detective film with Harry Angel tracking down witnesses: a morphine addicted doctor, former band mates, and finally, a rural New Orleans vodoo priestess named Epiphany Proudfoot (Lisa Bonet) in search of answers. All the trademarks of film noir are there, long shadows, cigarette smoke, crummy diners, and a gumshoe given the task of hunting down a missing person. But then the detective story starts to blend in with horror, black comedy and the mystical elements of voodoo and the occult to create this oddly fascinating hybrid.

Angel Heart succeeds ten fold when it comes to atmosphere. The cinematography is astounding, equal parts pulpy and evocative. Some scenes will be lit with a sweaty realism while others are deliberately artificial. You can see Parker’s influence all over the style of everything from Black Swan to all of those new quasi-religious thrillers (Stigmata, Legion, Constantine, whatever).

Mickey Rourke has personally said that he wasn’t drawn to Angel Heart because of the story. It was at a time in his career when he was fed up with acting and he only agreed to do the film because he liked the previous work of Alan Parker. But if this really was the case, he gives an incredible performance anyway. (This performance by the way, was cited by Darren Aronofsky as the reason he cast Mickey Rourke in The Wrestler). Rourke comes from the Marlon Brando school of acting. This school says that whatever external factors happen in a scene you should roll with them no matter what. This style promotes a lot of interaction with a character’s surroundings rather than just the basic blocking you see most films. Watch specifically when Rourke talks to a woman on the ocean shoreline. He keeps dodging the incoming waves to keep his shoes dry. Or later, when Rourke is approaching Lisa Bonet, a dog snarls at him. Mickey Rourke leaps back in surprise, trips, and tries to play it off as cool. The camera doesn’t reset. It keeps rolling and the actors roll with it. The closest comparison I can think of would be the much lauded scene in On the Waterfront when Marlon Broando is engaging in a walk and talk with Eva Marie Saint and she accidentally drops her glove. Instead of starting the scene over, Brando picks up the glove still in character, without missing a beat, and starts to play with the fingers as they continue to talk. These kinds of unscripted, honest moments make their performances more reaction than action. The actors are simply existing in the world of the film and it’s brilliant.

It’s also worth mentioning that there’s a graphic sex scene during which Rourke and Bonet are covered in blood. Even twenty years later this scene is still pretty shocking. Not only does Lisa Bonet look like she’s seventeen but she’s doing Mickey Rourke! The Wrestler is going to town on the oldest daughter from The Cosby Show. Really bizarre. It’s also said that this film caused a rift between Bill Cosby and Lisa Bonet. You can understand why. Here he was trying make this family friendly sitcom and sell Jell-O pudding pops, meanwhile, one of his show’s stars is on movie screens everywhere taking it from the same dude who now resembles the love child of Donatella Versace and Quazimodo.

And trust me, Angel Heart’s depravity knows no bounds. Just follow me here. At one point Epiphany explains that she’s the daughter of the man Harry Angel is looking for, Johnny Favorite. The film later reveals that Johnny Favorite has been inhabiting the body of Harry Angel all along. Therefore when Angel sleeps with Epiphany in the middle of the film he is actually sleeping with his own daughter. (That might explain why the two are covered in blood during their tryst, it’s representative of the dire sin being committed… yeah, so it’s not the most subtle film) Epiphany also makes clear that she was previously “visited” (code for “railed”) by the devil during a Voodoo ritual. Therefore when Johnny Favorite, in the body of Harry Angel, sleeps with Epiphany he is not only sleeping with his own daughter but also one the devil’s former lovers.

Angel Heart is also full of great stand alone scenes. I especially loved the moment in a Harlem church where Angel has been called to meet with Cyphre. The preacher is throwing down fire and brimstone while overtly encouraging his congregation to give him more money. The congregation stands up in a fever and starts throwing out their donations.

The scene made me think of this odd religious radio station in Virginia that I would sometimes listen to on my way to work when I couldn’t take any more “classic rock” (Why do classic rock stations assume our classic rock taste doesn’t go any deeper than fucking Queen’s “We are the Champions”). Anyway, one of these religious call-in shows was specifically designed to give financial advice from a Christian perspective. So one day a woman calls in with a litany of problems, she can’t pay her bills, her husband’s out of work, their home is in foreclosure, etc. Yet for some reason she doesn’t want to give up tithing! She feels this obligation to take care of the church before the roof over her head. And not only that, the host keeps encouraging her behavior. He keeps saying that even in tough times a person should tithe. It certainly makes you wonder.

Let me also address one outstanding issue. In the final moments of the film there are a lot of reveals. Including the revelation that (surprise, surprise) Robert Deniro is in fact the devil incarante. This fact is made apparent when, during his final monologue, his eyes suddenly turn yellow (bwah ha ha ha!). My thoughts were, yeah the effect is kind of bad, and yeah we probably could have been clued in to this revelation in some less obvious way. In fact, Mickey Rourke just got done screaming “Louis Cyphre…Lucifer!”.  Well, the yellow eyes recieved hearty disgust from my roommates. And I understand and admit that, yes, it was a dumb move on the part of the Alan Parker. But then this single bad effect seemed to cloud their entire experience of the film. So I found myself defending the rest of the film against this one corny moment. Why is this? Why is it that a film can be excellent and then one crappy scene can erase all of the technical and performance mastery up until that point?

Either way, I strongly recommend Angel Heart. It’s a master class in style and performance without being completely emotionally/narratively hollow (cough, Drive, cough).

Harry Angel  has a severe fear (that rhymed) of chickens throughout the film, much like Indian Jones’s fear of snakes. He keeps ending up in some circumstance where he has to face down a chicken. I still haven’t figured out what this represents.

There seems to have been a cinematic fascination with Voodoo in the eighties. Angel Heart, Serpent and the Rainbow, The Believers, even to some extent Indiana Jones and the Temple of Doom. Not really sure what could explain this. Maybe the raw, visceral otherness of Voodoo stood in sharp contrast to the feel-good yuppie-ism of Reagan’s America. Or,  I guess Voodoo ritual is a lot more visually active and thus more cinematic than other religions. It requires you to dance and yell versus Catholicism or whatever where you’re just sitting in a pew for a couple hours.

In a very, very small way Angel Heart called to mind the 1956 Academy Award winner Black Orpheus. Black Orpheus is really dated and kind of a drag but it features one of the most joyous moments in cinema. Watch.