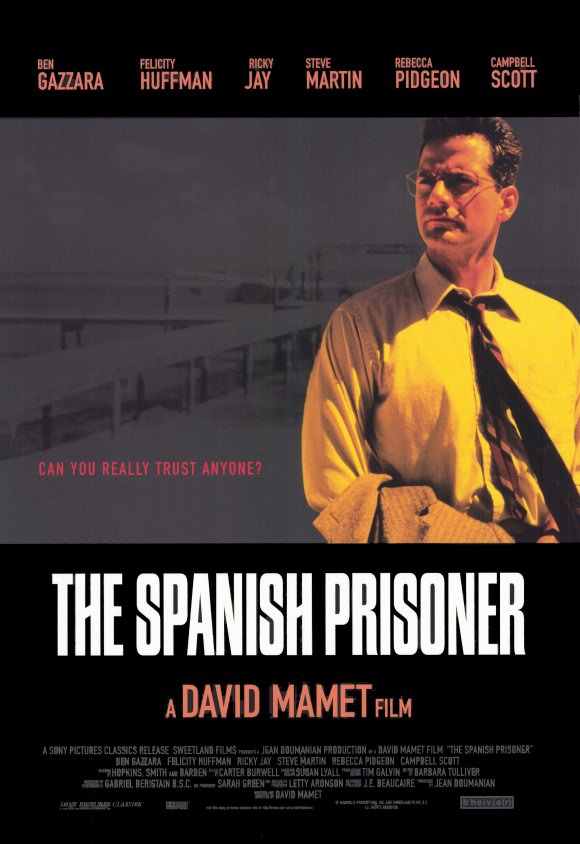 ( I was glad to hear this quote because now I have some validation for wearing the same ill-fitting t-shirts since eighth grade.)

Man, the 90’s just keep looking better and better don’t they? The country’s finances were in surplus. Gas was like a nickel to the gallon.  B.U.M. Equipment was still a brand that people wore. And Sundance was still a festival with a lot of legitimate credibility… as opposed to just a marketplace for the next low budget indy romance starring Paul Dano and Rhashida Jones as disheveled “artists” looking for love in all the wrong places.

So, back in 1997 there were still genuine surprises coming out of Sundance including The Spanish Prisoner a bizarrely understated con game film written and directed by David Mamet.

Now, David Mamet is one of those guys who’s revered in film and acting schools but lacks a large crossover appeal. Although he’s insanely prolific, having done everything from direct two Criterion worthy films (House of Games and Homicide), to writing books on the film industry, to creating the CBS drama The Unit, he still doesn’t have a lot of traction in the broader public consciousness (i.e. I asked my boss if he knew who David Mamet was and he replied, “You mean the crazy who keeps calling about sake?”).

I guess Mamet’s most well known work is Glengarry Glen Ross because the play won a pulitzer and the film version had a bunch of stars. Still, the people who love him really love him. Those people include everyone from my senior year acting teacher to P.T. Anderson. In fact, Mamet’s script for the film Hoffa is exactly what P.T. Anderson passed off as his own work in his freshman NYU film class. The resulting C awarded by the teacher convinced Anderson that the professors in film school weren’t worth the tuition.

I’d seen Glengarry Glen Ross  once and that’s literally as far as my experience with Mamet’s work had gone. Actually, I’m so far on the opposite spectrum of Mamet fandom that while in London I was given the choice of seeing Speed The Plow (his award winning show business satire starring Kevin Spacey and Jeff Goldblum) or Spamalot (the cringe inducing Monty Python musical) starring Alan Dale, and I, of course, chose the latter. A terrible decision by the way. Alan Dale was noticeably tired by the middle of the first act and only proceeded to get more and more sloppy as the show went on. By the end of the show his “performance” was not so different than watching a human marionette controlled by a sleepy drunk.

Regardless, I recently decided to check out The Spanish Prisoner because it had been recommended to me by Netflix based on my interests. A quick word about the Netflix reccomends feature, Yes, they get it right most of the time. “You know, as a matter of fact I would like to see The Passenger“. But man, when they get it wrong, whoa do they get it wrong. Just because I loved 48hrs doesn’t mean I’ll love The Adventures of Pluto Nash.

Anyway, The Spanish Prisoner tells the story of Joe Ross ( played by Campbell Scott) as a lowly corporate employee who invents a deliberately vague “process” by which his company can control their “market”. No specifics are given. Ever. Even the supposed profit that the company will make is written on a blackboard facing away from the camera so we’re left to see only the board’s greeedy eyes rather than an actual dollar figure. And because this “process” will net the company a lot of money, naturally they’re worried about others, the Japanese specifically, trying to steal it. Thus Joe gets involved in an elaborate con game involving a mysterious rich guy Jimmy Dell (played by Steve Martin), a come-hither secretary, the FBI, etc. No one is who they seem and the film proceeds through some legitimately exciting twists and turns.

But honestly, The Spanish Prisoner is tough to review because it’s awesome at times and literally laugh out loud awful at others. The very direct and over-enunciated way the characters deliver their lines establishes an uncomfortable atmosphere almost immediately. The characters also move like androids, think Mitt Romney interacting with working people or minorities. And for the most part these two elements work to create an unsettled world. Yet, when a character delivers a line like  “The Boy Scouts, that’s a hell of an organization” in that same creepy monotone with robotic gesturing, it’s a riot.  And so the film goes. The plot and it’s genuine surprises are all excellent, including some choice quotes by Shakespeare and Thorea. But these positives are countered by negatives, such as Mamet’s minimal directorial flourish, no unique visuals, basic editing, static camera work. He removes a lot of the strengths that set film apart from theatre.

I’d recommend the film because it’s truly disorienting.  And while the first forty minutes are pretty bland, by the end I was totally engrossed. The film also holds up surprisingly well for being from the 90’s. You get the occasional gray brick cellphone or XL sweater but we can forgive that.

There’s a great sequence when Joe is trying to meet up with one of Dell’s partners at a carousel. It’s a direct homage to a great scene in possibly my favorite Hitchcock film Strangers On A Train. The carousel makes for a very creepy and surprisingly tense setting. More movies should use it.

Apparently David Mamet has undergone a serious political conversion over the past few years. It all started with a rant he published against liberalism in the Village Voice and now he’s gone on to become an extreme conservative. Weird right?

And because I know you’re just dying for more of my personal history, I’ll tell you that seeing Steve Martin play a straight role reminded me of the time when I was ten years old and my dad rented the film Novocaine for my brother and I. He thought it would be a hilarious romp akin to The Jerk or Planes, Trains, and Automobiles. Instead Steve Martin is doing coke and having slow motion sex with Helena Bonham Carter twenty minutes in. Try watching Cheaper by the Dozen after that.