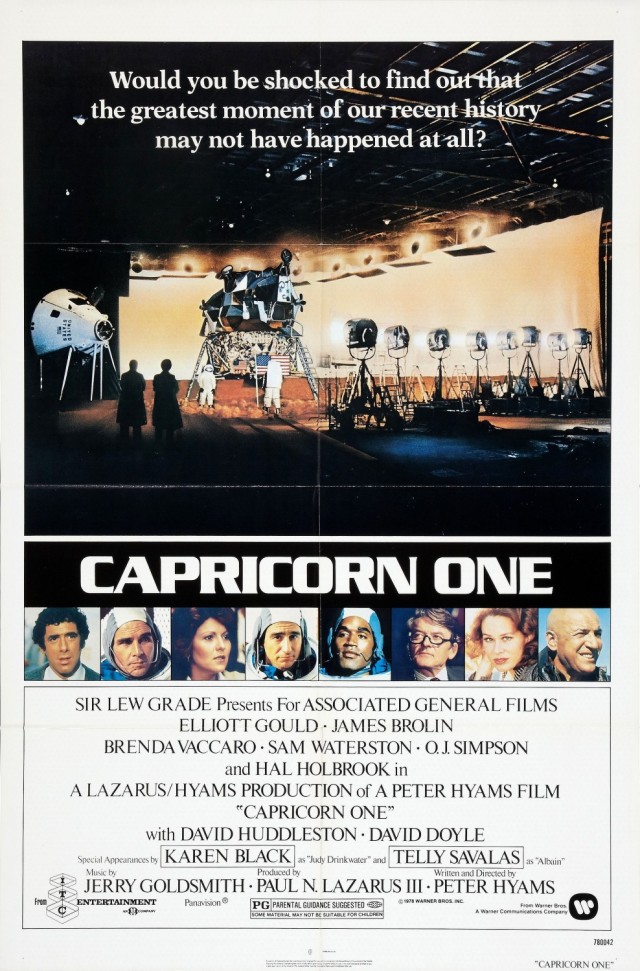 “My generation thought that if it’s on television, it’s true. I was sitting there one day watching TV and CBS News was covering the space shots. They would cut to a simulation in St. Louis, Missouri of what was going on with the Apollo missions. I realized that the whole story was being fed to America by one camera. That’s kind of how I got the idea for CAPRICORN ONE. If one camera can lie, then just because you’re seeing it on television, it doesn’t mean it’s true.” – Peter Hymas discussing Capricorn One

“I think conspiracy theories broadly offer people a narrative that is sometimes more streamlined than what is going on in reality and pretty often identifies an enemy that you can be mad at.” – Anna Merlan

We’ve all heard the conspiracy theories, right? Kubrick worked with NASA to fake the moon landing! JFK was killed by some combination of the CIA / Mafia / Lyndon Johnson / The Smothers Brothers / Castro / and the KGB! Secretary of State of Mike Pompeo is actually a Barbara Streisand clone under 65 pounds of makeup! (Okay, so I made the last one up…or did I??)

And it’s not hard to understand why conspiracy permeates so much of American life, especially now. As the world becomes more and more complicated, as we surrender more and more of our lives to runaway technological change, as the problems we face become so overwhelming it’s hard enough to comprehend the problem, let alone the solution — conspiracy theory is easy. It’s easier to imagine a secret one-world government than it is to admit that our leaders are just as petty and lazy as you and I. It’s easier to call global warming a hoax than it is to change your behavior. It’s easier to believe that the DNC rigged the primaries than it is to admit that more people just voted for the other candidate.

Conspiracy puts a chaotic world in order. Conspiracy creates powerful adults with ultimate control where there are none. Conspiracy is a soothing balm for a raucous mind. And the allure of conspiracy is what makes the plot of Capricorn One such a compelling premise for a movie. Released in 1978, and directed by Peter Hymas (Timecop, Busting, The Star Chamber), the film tells the story of a faked mission to Mars and the fallout when NASA’s hoax goes awry.

The first sequence is the film’s best. It’s a beautiful summer day and crowds are gathered to watch the launch of the first manned rocket to Mars. But as the astronauts strap in for the mission, suddenly they’re whisked off the shuttle and onto a nearby plane. Hymas then juxtaposes shots of an empty rocket taking off against shots of the astronaut’s plane landing at a sound stage in the middle of the dessert. There’s a subversion and a concision to this opening sequence that the film never gets back.

Eventually, the audience, along with the astronauts, are told that because NASA doesn’t want a funding cut, and big business wants more lucrative contracts, they’ve conspired to stage a Mars landing. After some thematic monologuing and threats to their families, the astronauts (played by Sam Watterson, James Brolin, and O.J. Simpson) reluctantly agree to the charade.

For a while, the plan seems to work out. The public is intrigued. The president is happy. The families of the astronauts are none the wiser. But on reentry, the empty shuttle explodes, meaning that the real astronauts (who’re still hanging out on the sound stage) are now a liability. Long story short, the trio realizes that they’ll probably be killed to keep the truth a secret. So they escape into the nearby desert. Meanwhile, a reporter (played by Elliott Gould), starts to uncover the conspiracy, setting out to rescue the astronauts before it’s too late.

For the first hour or so Capricorn One lives up to its juicy premise. There’s a rogue engineer who notices something fishy and then mysteriously disappears. There’s a tense video call where the astronauts pretend for the cameras that they’re approaching Mars. We even get the classic scene of men in suits breaking into an apartment and frantically pulling drawers out of desks (nothing says federal power like disrespecting household furniture).

Not to mention, Hal Holbrook (Deep Throat in All The President’s Men) brings a particularly sinister gravitas as the NASA exec organizing the scam. And Elliot Gould inhabits his reporter in peak, rumpled wise-ass mode — tie hanging low, cigarette dangling ever so gingerly from his mouth.

It’s in the second half where things come apart.

The issue is that Peter Hymas doesn’t seems particularly concerned with the story behind the scenes. He isn’t interested in how deep the hoax goes. The second half of the film has none of the dread or twists we expect from a great conspiracy thriller. Gone are the meetings at dusk in parking garages. Gone are the threatening notes slid under hotel room doors. Instead, the second half spends most of its time following the astronauts, parched and stumbling around the desert, trying to survive.

So while the final helicopter chase puts a knot in your throat (with real stunt helicopters diving in and out of canyons) — the actual story, the thing that hooks you in the trailer, never pays off. Capricorn One is plotted like a Wikipedia entry. It bounces from scene to scene but never comes together as a narrative. It’s like listening to someone tell you the plot of a movie they half-watched on a flight to Lisbon.

Capricorn One fits squarely into the sub-genre of 1970s American “Paranoia cinema” — films like The Conversation, 3 Days of The Condor, and of course Alan J. Pakula’s masterful “Paranoia trilogy” (Klute, Parallax View, All the President’s Men). Coming off Watergate and Vietnam, there was a market in the 1970s for films that pulled back the curtain on America’s rotten core.  Whether it was dolphins trained to kill presidents, or military prisoners hijacking nukes — there was always a cover-up, and always an agitator ready to expose the truth.

But the most memorable conspiracy films sweat the details. They pull at the threads of plausibility just enough. Think about a film like JFK. The details make it terrifying. The rabbit hole has the illusion of going deeper and deeper. JFK feels like it was edited and conceived by a truly paranoid mind (turns out, it was). As a viewer, you start to feel sucked into the shadows.

Instead, Capricorn One is only interested in the abstract. Like most conspiracy theories, Capricorn One can’t stand up to anything more than glancing scrutiny. If anything, you wish it had more to hide.